Shanivar (Saturday) is dedicated to Shani Devta(Saturn).The Saturday vrat keeps away all the hurdles and misfortunes.  Saturn sits in a mirror chariot, yoked with eight black horses. The recitation of Shani Chalisa is also beneficial. On this day the devotees worship Saturn idol made of iron. Black flowers, black sesame seeds (til,). Horse bean (Black urada) and black clothes are used for worship. Black articles and Mustard oil are given in donation. Devotees also feed ants with whole wheat flour. 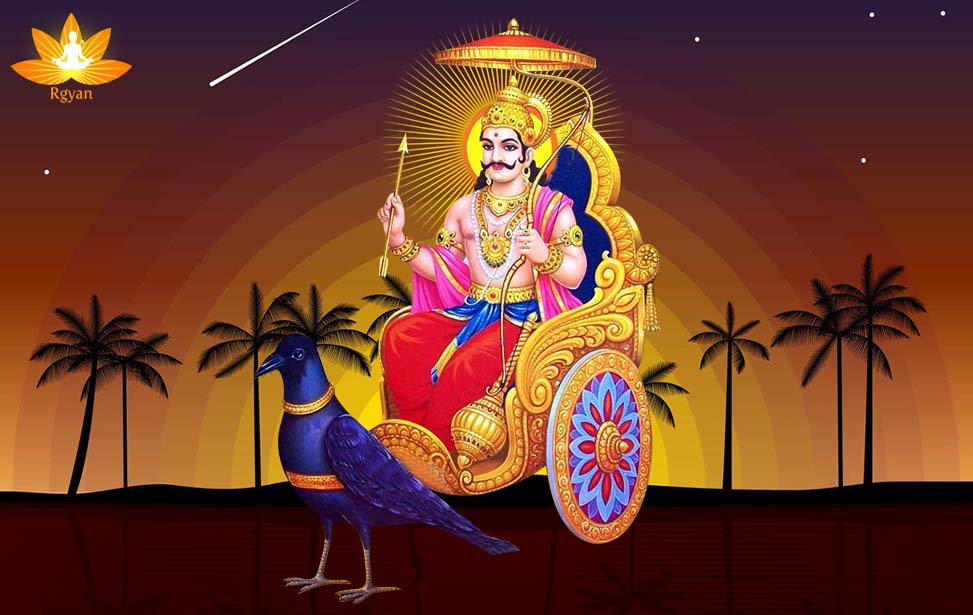 Once a debate occurred between all the Gods in the heaven about the greatest of them all. But, they were unable to decide and the debate turned into a war like situation. All of them then went to Indra and asked him to adjudicate the matter. Indra was in great dilemma and after thinking for some times he said about his inability to judge the matter and suggested them to go to the court of king Vikramaditya of Ujjayani who is known to be a great justice.

On his suggestion, all the gods went on earth and visited Ujjayani. When Vikramaditya came to know about the visit of Gods, he himself welcomed them. After coming to his court, the Gods asked him to solve the matter. Vikramaditya too got in great dilemma as he knew that all the gods were powerful in their own ways and telling anyone small or big may bring him his ire.

After thinking for some times, the king got an idea. He ordered for nine chairs made of different metals: Gold, Silver, Bismuth, Copper, Lead, Galena,  Zinc, Mica and iron respectively and got it kept in a row one after the other. He then requested the gods to sit on their respective seats. When the Gods sat, he said that you all have yourself judged the greatest of you all. The God sitting on the first seat is the most powerful. Shani Dev was sitting on the last seat. On listening the judgement, he felt humiliated and got angry.

He said “you do not realise my power. I will destroy you. Sun stays in a zodiac for one month; Moon for two and quarter days; Mars for 1 and ½ months; Mercury and Venus for 1 month; Jupiter for 13 Months but I can stay in a sign for 7 and ½ years.  Even big Gods had suffered my ire.

Ram had to stay in the forest due to Sadesati and even and Ravana died and his family got destroyed in the war due to Sadesati. Now its your turn to face my ire. All the Gods then went away.

After few days Shani Deva visited Ujjayani in disguise of a horse trader. He brought many attractive horses along with him. When Vikramaditya came to know about this, he sent his stable-lad (Ashwapaal) to buy some horses but was perplexed on knowing the prices as they were too expensive. He went back and informed the king about the same. Then the king himself went to the trader and selected a beautiful and healthy horse for himself.

When the king sat on the horse to take a ride, it took of with the speed of a light and took the king to a far away forest and dropped him there and disappeared. The King loitered in the forest in hunger and thirst to locate and reach his kingdom but of no avail. After some time he met a cow-herd and asked him for some water. After soothing his thirst, the king gave him his ring. The king then asked him the way and reached to a city nearby.

The king rested on a shop of a businessman and told him that he is from Ujjayani. While the king was on his shop, the businessman earned high profits and the businessman took him to be a lucky visitor for him and took Vikramaditya to his home for meal. The king saw a necklace hanging on the peg and to his surprise he saw the peg swallowing the necklace. When the businessman saw that the necklace is not there, he took the king to be a thief. He ordered his servants to tie Vikramaditya with a rope and take him to the king of that city.

Though Vikramaditya explained him the real story, the king did not believed him and ordered to slit his hands and legs. His hands and legs were cut and then he was left on the city streets. Few days later a Teli(Oil-man) felt pity and took him to his house. The Teli taught him to ride bullocks and handed him this work.

Time passed and the period of Sadesati was over and spring season came. One night the king was singing Megh Malhar Raga. At that time, the princess of the town, Mohini, was passing from nearby and was attracted by the song. She sent her attendant to call the singer. When the attendant returned, she told the story of the king to the princess.

The princess was attracted towards the singer and even after knowing about his paralysis, the princess decided to marry him. Initially her parents resisted the decision but the princess protested and said that she will marry that person only or else she will remain unmarried. Finally the king agreed to marry the Princess to Vikramaditya.

After marriage, Vikramaditya and the princess started living in the house of the Teli. One night, Shani Dev came in his dreams and said  “you ranked me lowest among the Gods but now you have seen my power”. Then Vikramaditya apologised to him. Shani Dev accepted his prayers and disappeared. In the morning, Vikramaditya and his wife was surprised to see his body back to its previous shape. The king then thanked Shani Dev and told the princess about his real identity and about the Sadesati of Shani Dev.

When Vikramaditya reached Ujjayani along with the princess Mohini and the daughter of the businessman, they were received with full warmth and the peoples burnt candles and celebrated Diwali in this happiness. Next day the king made an announcement that Shani Dev is most powerful of all the Gods and all the men and women should observe his fast and listen his Katha. This announcement made Shani Dev very happy and from that day onwards the wishes of all the people observing this fast started getting fulfilled with his compassion.

Please drop your valuable suggestions or requirements if any